Diane Ortenzio-Cooling has been training in Isshin-Ryu Karate since 1979. She was a young employee of Bell Telephone and worked in a downtown building in Harrisburg, PA known for being rough. She walked into the dojo of Sensei Jim Clark and only planned to stay for a few self-defense lessons. She loved the challenging classes and stayed. She achieved the rank of san-dan before her career took her to Baltimore, MD. 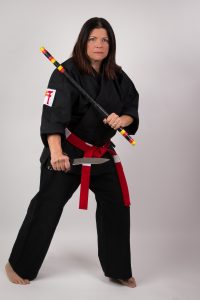 In Maryland, she trained in the Baltimore Dojo of Sensei Jeff Bracone and then the Elkton Dojo of Master Bud Ewing. She put her san-dan ranking on the shelf and started over, dissecting and rebuilding her foundation of Isshin-Ryu Karate under the Order of Isshin-Ryu. She was evaluated and recognized as a shodan in 1987. To her, knowledge is more important than rank.

Over the years Master Ortenzio has earned the Female Instructor of the Year and Spirit of Isshin-Ryu awards from the international Isshin-Ryu Hall of Fame, as well as being inducted into its Hall of Fame in 2003. For over 21 years, she was a fierce competitor in tournaments on the east coast, consistently placing in the top 3 spots for kata, weapons kata, and sparring. She opened Sierra Dojo in Minden, NV in 1999, becoming the first female dojo owner and chief instructor in Northern Nevada. She became a POST certified defensive tactics instructor for law enforcement officers and an operations leader for the Douglas County (NV) Sheriff’s Search & Rescue team.

Master Ortenzio instructs karate, weapons, and arnis classes, along with women’s self-defense seminars. She is a senior black belt and board member of the Order of Isshin-Ryu Karate organization, and a guest instructor at various schools around the United States and Australia.